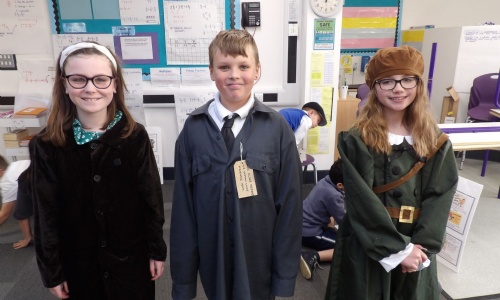 On Tuesday 2nd November, Year 6 were treated to a World War 2 day. First, we all had to dress up as average evacuees from the war. Miss Williams was a land girl and  Mr Alden dressed as a typical man from the WW2 era. We especially liked this because it was great to see how children dressed during WW2. After that, we met a man called Carl , who ran the WW2 workshop.

To begin our workshop, he explained the key events throughout WW2. He also showed us about who invaded where, why and what other countries got involved. We did many games and challenges  including; code breaking; a quiz and a ‘don't  buzz the wire’ game to see how steady our hand was which represented deactivating a bomb.

After this, we had a talk about what they ate and how they used the ration book. This was interesting because they didn't eat the same things we do today. Also, all of the food wasn’t in just one shop it was in many such as: the meat was from the butchers, the milk and cheese were from the dairy, the bread was from the bakers.

He also showed us armour and weapons including: grenades, revolvers, machine guns and knives. We also saw a rifle which was called the Lee Enfield. We loved seeing all of these as it really captured our imagination. He also showed us what the soldiers would have to carry with them-we couldn't believe how much there was! Overall it was a very successful day.

At Roebuck we are Historians!