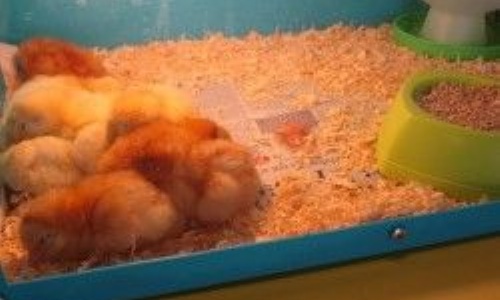 Thursday 5th May: Well, what an eggciting few days in Nursery we have had this week! Yesterday there was only one chick hatched when we went home at lunchtime – this morning when we arrived in school there were 9 baby chicks cheeping ‘hello’! Then, later on this morning, we noticed the last egg was starting to crack open too – the final chick was starting to hatch… All the class eagerly watched and waited as the last little chick worked hard pecking it’s way out of the eggshell… and we all gave a cheer when it finally emerged, tired and exhausted. We think it is another girl chick, which will now make 6 girls and 4 boys. We will ask each class in Roebuck school to name a chick – and we will name the last chick. We have now moved our chicks into their brooder box.