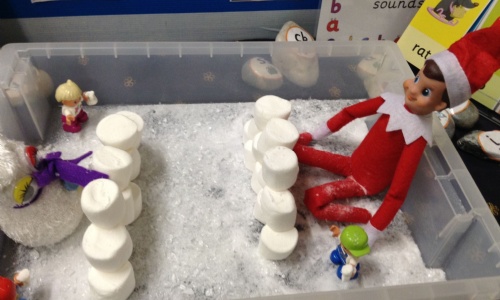 Last Monday, a snowy track with footprints had been left in both reception classes. Who could have left them? The children investigated and found a Christmas elf had appeared with a book. The elf couldn't talk but the book told us all about him.

The elf has asked the children to give him a name. So Oak called thier elf Sam and Willow called their elf Charlie.

The book told them that they must not touch Sam and Charlie otherwise his magic would disappear. Every night, Sam and Charlie reported back to Father Christmas what the children had been doing that day.

Every morning the children have been excited to see what their elf had been doing each night while we had been sleeping.

So far he has drawn a self portriat, flicked through a magazine and chose something for Christmas, drew Minions on our snack bananas, had a snowball fight with the other toys in the room and made a snow angel.

I wonder what he will do next? Can you guess?