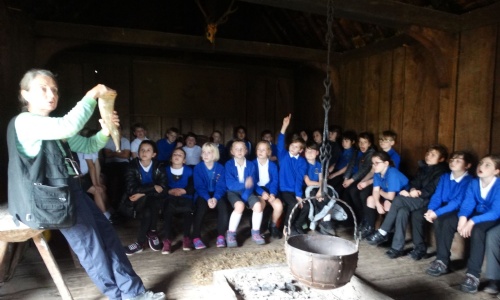 Year 5 had a fantastic trip to West Stow Anglo-Saxon village on Friday. After an exciting coach journey (it had been a while!) the children were raring to go. We began our day by exploring the Anglo-Saxon museum and artefacts, handling objects found at the site during past excavations and learning about how the archaeologists completed the dig. The children enjoyed looking at reconstructed items and exploring what parts of each object survived the test of time in the ground. Next, it was time to explore the Anglo-Saxon village - a series of reconstructed buildings. The children enjoyed going into the sunken house - although their feet got a bit sandy - and this is exactly how the archaeologists realised the Anglo-Saxon's must have lived above the pit on an additional wooden flooring. Each building show cased different elements of Anglo-Saxon life including where they would have slept, how smoky the room became with the hearth lit and the children even got to see how they weaved first-hand. Our day ended in the great hall where all the children gathered for a final question and answer session. The children had a great day and learnt a huge amount about Anglo-Saxon times, some even taking notes as we moved around! A huge thank you to our parent helpers who helped to make the day such a success and to the children for their enthusiasm and model behaviour throughout - a true credit to Roebuck.