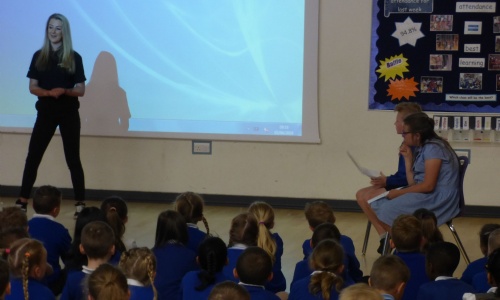 The latest Dreamcatcher assembly was presented by Stevenage local  Michelle Westby, who achieved her ambition of being a stunt driver. Sharing with the children how she became a stunt driver for the live touring show "Fast and Furious Live," Michelle explained that her career path took her to doing jobs that would earn her the money to then realise her dream. Working hard as a project manager on a building site gave her the opportunity to save up the money to buy her dream car, which then allowed her to the follow her dream of learning how to be a drift driver and eventually drive cars for the famous live touring show. Michelle told the children to "dream big" and "dream to be anything that you want to be," but stressed that there would always be hard work and setbacks along the way.  To finish off with she showed us a promotional video of her driving her car at a track as well as giving the children the opportunity to see what her car was really like.