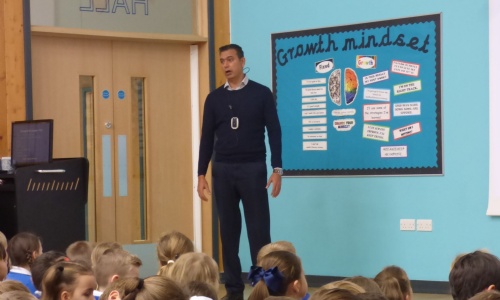 Wow! What an interesting assembly that was. We didn't realise how much work, effort and testing went  into the Job that Mr Thakkar does. We were every fortunate to have the latest Dream catcher  hosted by Divyen Thakkar , who works for Transport for London as a Senior Software Test analyst. Mr Thakkar told the children about how he has helped Transport for London develop test analysis software for the Oyster card system , which entails devising a test programme that checks what happens when an Oyster card is presented for payment at a machine. The software makes sure that people aren't charged too much for the journey that they have made and takes into account thousands of different combinations such as the distances travelled so that a cap is placed on the amount a person can be charged.

Mr Thakkar talked about how as  a child growing up in India he dreamed of being a pilot but when he moved to England, he developed his skills in software analysis. On a typical day he would attend a variety of meetings about how the software programming for the system was working.  To be successful in his job, he said he had to study hard and he did Maths, Science and Computing. As his nugget of advice for the children , he said that to be successful you need to follow your dreams and do something in work that you enjoy.