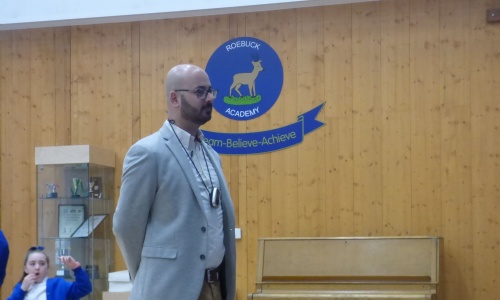 Roebuck Academy was visited  on Thursday blogger, JP Zarka, who took part in the latest Dream catcher assembly. Having grown up in Chicago, JP dreamed of being a basketball star, a Rock star and a best selling writer in his early life. However, since the age of 13/14 he wanted to come to Britain having been inspired by a change of culture and went into teaching. Having sporting interests such as basketball( with the inspirational Michael Jordan) and WWE wrestling, JP decided to try and share some of his ideas about wrestling by writing articles on his own website. Now he has written over 350 articles  and blogs and even starred in his own radio show, when sharing stories about wrestling and WWE. Having shared what a typical day in his work was: including taking his children to school, reading and researching material for his blog and then posting his blog on social media, JP gave the children a "nugget of wisdom", which was to try your best and forget about all of the rest.