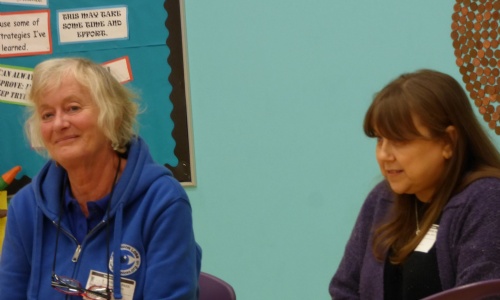 On Thursday 21st November, we were joined by two ladies called Vanessa and Tina.

Vanessa works at a charity called Vision Loss and this charity has been in Hertfordshire for over 100 years. Tina is being supported by this charity. They visited our school to tell us more about their charity and to give us an idea of what it might be like to work for one.

Unfortunately, Tina lost her eyesight quite a while ago when she had a child who was only one. Luckily, this charity helped her to get through life while being blind. Tina described what happened and how she felt. “I was just scared because I couldn’t see and I didn’t know how to look after my child while being blind.” Throughout these years, Tina has got a lot of help with home life activities and situations.

We were all very inspired by the assembly. We were moved by what a fantastic job the charity and its workers such as Vanessa do to help people and by Tina, who is an inspiration to us and who was so brave to come in and talk to us all about her daily struggles.