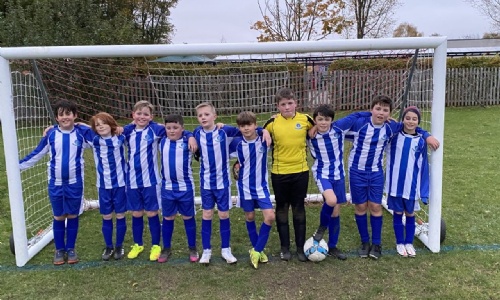 On a freezing cold night on Monday 8th November, Roebuck B Team had their first football match of the year in the form of a friendly away at Giles Junior School. This was the first time the squad had played together in competitive match against another school. The children were lucky enough to wear the brand-new football kit of blue and white stripes with the Roebuck badge proudly on display on their chest. All the team battled so hard throughout the game, having tons of fun even with the losing result.

Roebuck started off very strongly with the scored tied at 0-0 for the majority of the first half, unfortunately letting in a couple just before the break. The kids were buzzing to get out for the 2nd half and gave it a real good go having several attempts at goal on the counter-attack but without any luck. Giles stuck a few more goals in throughout the 2nd half, but the resilience from Roebuck was amazing! Never gave up, smiles on faces and having fun! Well done Roebuck.