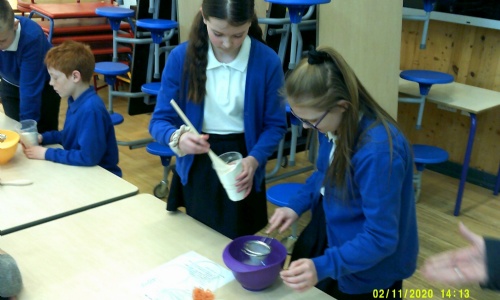 On Tuesday Year 6 started the day with an E-safety assembly and task, followed by a road safety awareness workshop and finally finished the day off with our Fantastic Finish to parents.

We were joined by Barbara and Chris who work with the council to keep the roads safe. First we listened to a scenario about a road hazards and we discussed where should put different crossings. The council only gets a certain amount of money a year for different crossings so in the scenario we had a budget of £200,000. We had to think about how much money we were using and where to put the different road safety features. For example puffin crossing was £54,000 and we had to think about how many we used and their location.

For e-safety day we were read a story titled #Goldilocks. We then had a go at making our own #fairy tale story. We were given the story of Jack and the Beanstalk to make up a funny piece of writing to go along with two designed pictures. In our story, the main character, Jack, posted things they weren’t supposed to and got into trouble for his actions with the giant.

This doesn’t mean that we have finished our topic. In this period of time we read out a poem written by Wilfred Owen titled Dulce et Decorum est. this poem was accompanied by an emotive drama performed by 10 members of the class. Afterwards we sang a wartime song called “Pack up your troubles in your old kit bag”. We sounded pretty amazing if you ask me. Next we did a bit of cooking with our parents and made carrot buns using only the food that was available in war time as a result of rationing. We used a small amount of each item: sugar self-rising flour; sultanas, grated carrots, milk and eggs. We were given a wooden mixing spoon and a plastic bowl. The results wee delicious!