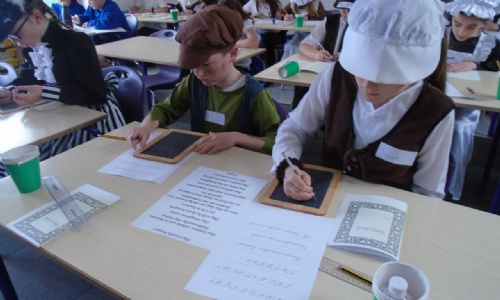 Last week, Year 5 got dressed up as Victorian children and enjoyed taking part in a role play day.  First, we had to choose a Victorian name which we would be known by for the rest of the day. Before entering the classroom, we had to line up silently and in height order. The boys had to be at the front of the line and the girls behind them. When we entered the classroom, ‘Ma’am’ and ‘Sir’ checked our hands for cleanliness and we had to chant a rhyme, ‘cleanliness if next to godliness.’ A few children were told off for being dirty or biting their nails.

The first part of the day was filled with the 3 Rs – Reading, wRiting and aRithmetic. Victorian education wasn’t very interactive so we spent most of our time chanting (times tables and poems) and we weren’t allowed to ask questions! We also read text from a Victorian book about kings and queens and read a poem which explained how the Union Jack flag was created.

Everyone had the chance to practise their handwriting using a pen and ink as well as writing on a slate – we ended up with some very messy children.

During playtime, we played some games that Victorian children would have played. These included: pass the slipper, throwing bean bags at a target, hoops, hopscotch, skipping and tug of war.

After play, we got creative and made out own spinning tops, a thaumatrope (which is a Victorian animation made from card) and chalk observational sketches of leaves.

During the afternoon, we watched a production by Hobgoblin production company about a boy called Harry who escaped from the workhouse and ran away to London. This was a really interesting play which helped our learning come alive as well as teaching us more facts about Victorian times.