Caught on Camera! Have you seen the Roebuck Dragon? 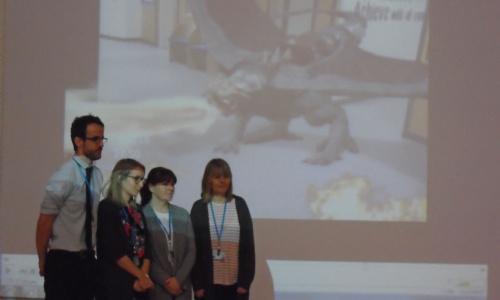 Today we had a very interesting start to the week with a special assembly called by Mr Mari. Mr Graham had spotted some unusual activities on the school's CCTV cameras at the weekend - a dragon flying around the school! After sharing the footage with Years 2-6, a few of the teachers commented that they had noticed some strange occurences such as: foot prints in the snow;the ground vibrating just across the road from school; the school hall being left in a mess and Mr Downie finding the KS2 corridor extremely hot this morning!

Just as teachers finished sharing their observations, Mrs Thomas interrupted the assembly as Martin Elvery from the Comet had turned up to ask questions following reports of unusual sightings in Stevenage over the weekend. The teachers were all interviewed by Martin for the newspaper and children also commented on things they had noticed over the weekend. Mr Mari and Mr Graham had checked the school first thing this morning and we were all told that the dragon has definitely gone.

So, assured by the knowledge we were all safe, we eagerly went back to our classrooms to discuss the assembly further. Year 5 have been looking at a dragon book Dragonology from the library, Year 2 have been drawing pictures of the dragon and Year 6 did some drama based on a story Miss Thomas found about a dragon. We are looking forward to a fun week writing stories and carrying out more activities based on Dragons - whilst keeping an eye out for the dragon of course!