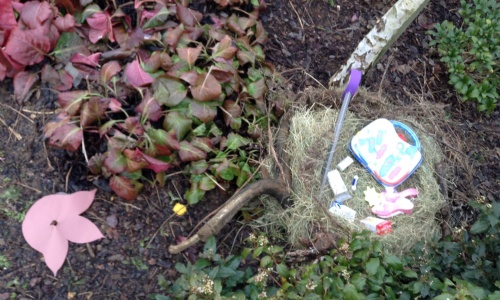 There were strange things happening over the weekend at Roebuck Academy including a strange finding in the EYFS outdoor area!

Reception were in the middle of their maths lesson, when they first saw what they thought was a nest. They were looking outside, using positional language to try and create a map of the new outdoor area when some eagle eyed children spotted large footprints heading to the corner of the grass area.

Upon closer inspection, we found a large nest with some interesting possessions inside. A sword, some sore throat sweets, plasters, a bandage, some peppermints, princess shoes and bag and a golden star.

Hopefully we will find out more during the week!