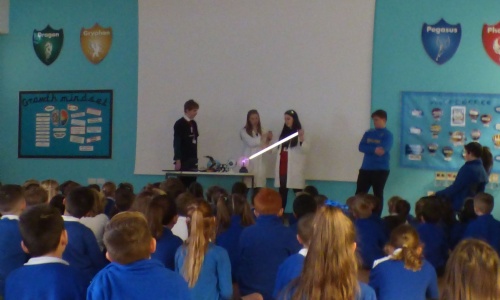 This weeks Dream catcher assembly saw students from Thomas Alleynes showcase some of the work they have been doing in school and sharing the ambitions they have for the future. Each set of children presented learning they had worked on at school but it was obvious from their enthusiasm that these were areas that they had a real passion for ,as each of the children mentioned how they spent some of their own time out side of school continuing their interests in these subjects.

First up was Jack, who studies Biology, Psychology and Physics, and he talked about the psychology of sport and how that  in his spare time he does a lot of sport. He was then followed by Zander , who studies  Computer Science, Maths and Physics. He wowed the children with a robot that he made himself and he showed the children how he controlled it with coding using Python. In his spare time he mentioned that he  makes things using computer science. Finally it was Jemma and Lucy, who study Biology , Chemistry and Physics. They  showed the pupils how static electricity could help light a fluorescent tube bulb by flowing through it, as shown in the picture above. It was no surprise that in their spare time they enjoyed doing scientific experiments. Just before the end of the assembly the students provided their  nugget of wisdom, which was something that all of them agreed with  that, "If you want to do something don’t stop trying and do it."