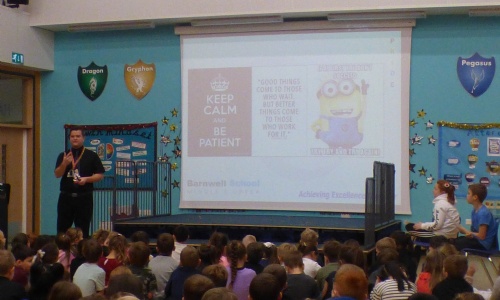 The last Dream catcher assembly of the Year saw Mr Reavell, from Barnwell School, talk to the children about the way in which he became a teacher. Mr Reavell told the children how he needed to show a lot of resilience and perseverance when he was younger when he was trying to pass his English GCSE as he took the exam 5 times.  He was so determined to pass the subject he even went to night school and had private tuition, but he knew how important having the qualification was as he wanted to become a teacher. When he eventually passed he was able to got to Middlesex University and train to be a teacher. Mr Reavell mentioned that although he had been in the same school for a long time, he has had a wide variety of jobs, such as Teach Design and technology, Exams Officer for the school, Assistant head of Year, Head of Year, Head of House, Head of Enrichment and because of this he never gets tired of his job.