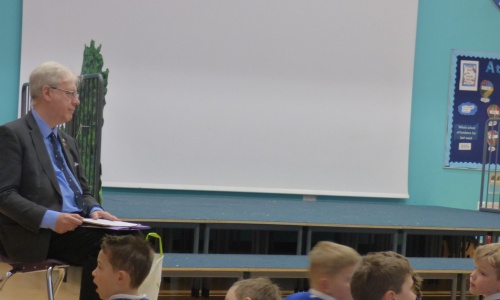 Roebuck Academy was visited by, recently retired Rocket Scientist Peter Slott this week. Right from the age of 8, when he was bought a book by his father about Space flight, Peter dreamed of being an astronaut or working on space rockets. Years later Peter achieved his dream having worked in Stevenage for Airbus in Gunnels Wood Road and was involved on a variety of projects including the design of satellites. His first project was designing the first Sky TV satellite, which was  launched from the Ariane space rocket and also included designing and making the Space pallet on the Space Shuttle.

Inspired by watching the rocket launches during the space race in the 1970's, Peter completed a mechanical engineering degree and then he entered the aeronautical industry. A typical working day would involve a host of meetings and then working on his computer putting together designs orf a variety of parts on the satellites.

Finishing off the presentation, Peter provided the children with his nugget of wisdom which was to try and achieve your dream by any means how, there will always be a different way to get your dream job, just don't give up and keep trying.